What's the places to check on these? Rusty areas I wouldnt expect? I know the SLS is dead on this one, but anything else odd to check thats special to the wagons?

Dave aka Ghan
U

89 300CE, 62 220SEb
Joined Aug 18, 2009
·
272 Posts
RUST RUST RUST! I just bought an 85 wagon, I got lucky with a clean wagon! I have noticed that the chrome trim can let water seep in, leaving a pond in the rear compartments. Open both rear compartments and look at the 'buttons' that hold the trim into place. There are drain holes, make sure they've been kept clean and open. That's my input.

Obviously service records are the main thing. There's a sticky someplace that is a check list type buyer's guide (might be on a different forum).

You'll get plenty of returns on this post, good luck and keep us posted!
► Show Full Signature

Joined Jun 9, 2009
·
496 Posts
Are we talking the chrome body trim? I take it theres removable compartment hatches in the back, like the one which holds the spare tire?

This wagon claims to have a list of parts done to it, but a very low price. I'm very skeptical, but at the price point and being only an hour away, I'm on it like a fat kid on a donut!

I'll post pics & the story later either way if I buy it or not! This wont be the next sight unseen 11k creampuff without pics!

Joined Jun 9, 2009
·
496 Posts
One thing the owner mentioned is that when you go to drive it, the lever needs to be pulled back to S for it to go into gear. Then it drove fine. Thoughts? Immediately I'm thinking it's a bushing/adjustment issue. Can anyone tell me otherwise?

I've been lucky and not really had anything but vacuum shift issues so far on both of mine.

2013 SL550 Grey/ Red/Black Ash wood with every option
Joined Jul 31, 2005
·
427 Posts
Dave, rust in the usual places, door bottoms for one. The area that concerns me is the battery, battery tray and under the tray. Spare tires and the battery area are good indicators as to what might be going on with the car. The battery tray is either going to be rusted through and the hold down clamps might be missing or it might be secured and in good shape. Or you might notice alot of jumper cable teeth marks on the terminals. I would call the owner and tell him/her that you want to cold start the vehicle. I would be more concerned about the engine compression. If possible have it inspected and a compression test performed. The spare tire is a good indicator of how the car was taken care of. If you see steel belts coming through, or a bent rim and damaged tire it will throw up a red flag. Eyeball the vacuum lines and see if anything is disconnected. The shifter needs the bushings. You'll note a very metallic sound when moving it into drive. The best thing to do would be to get it on a lift and eyeball the underneath. Also service records and receipts will help. Well there are probably a few other things I could think of to check, but that's all the input I have at the moment. Let us know how you do......Thor
► Show Full Signature
1971 350SL 4-speed stick- sold
1979 300CD- sold
1979 450SL (Euro)- sold
1985 300D- sold
1989 560SL- sold
1994 E320 wagon- sold
1995 SL500- 46,000 mi.- sold
2004 Land Rover Discovery- sold
2009 SL550- Silver Arrow- 26,275 miles- sold
2013 SL550-

Joined Jun 9, 2009
·
496 Posts
Thanks for the thoughts! I just know the other two had the chance (and one was) rusty near the rear window, so since this doesn't have the same rear window design it might have been the door itself that rusts and can't be opened.

The owner also told me the back hatch didn't hold itself up - I figure it's just the normal rear hatch problem on any car/truck, the shock type things.(brain fart, can't remember what you actually call them)

1984 300TDt
Joined Oct 19, 2009
·
265 Posts
The only place on mine that Ive found rust was from a dent spot that they put too much bondo on instead of fixing it correctly (back hatch). The bondo cracked and let water underneath... I sanded it down (way down) to where it looks good and the bondo isnt 1/4" think LOL. You will probably be pleasantly surprised to see the backs of the sheet metal is at least primed when you open up the side panels in the cargo area. Good luck on your find

So, I knew it wasn't going to be a creampuff - but that's not what I was looking for. I was just after a wagon that would run decent, that I might be able to get 20k, perhaps more miles out of to get a feel for the wagon. My pricetag was to be 4k or under, price based on condition.

So, I didn't even ask the guy what the rust was like.

Stunned. FAR better looking than I expected. The usual 'needs a buff' but it's actually original paint... She's got dings, she's got dents, but no big holes... upon further examination, I check out the jack points...

Well, perhaps the kids of the family have thrown dead rat carcasses in the back, or at least, handfulls of 10yr old frenchfries...

It has a couple of cracks in the dash. The glove box is a bit unruley. ... I have a spare glovebox that's in great condition, in blue... .... and since I'm not looking for 'minty-mint' the cracks don't bother me at all. I might mind if a Rottweiler had eaten half of it, but it was clearly just baked in the sun, like my other blue dash'd 300CD.

I didn't grab a pic of the interior of the trunk, my bad - but there's not much to see - it was really quite clean. No 3rd row seat, no 2nd row headrests, but again, this wasn't to be my creampuff.

Ok, so fine. What about the back! I bet those backup lights are destroyed, and the whole back end has a huge smash in the back! ... ... WTF is that?! oh, that'd be the tow hitch. Are you kidding?! All emblems fine. No big dent...

So, what now? I bet it won't start. The owner has left it stone cold overnight for me... hop in, turn the key...

So... after that little run, drove around the neighborhood.

Things to note:
Spare - perfect. no rust in site back there.
Tires - 95% tread. Might as well be brand new - Snow tires.
Steering perfectly tight. Better than either of my other two. Less play in steering box.
Windows work (all but rear drivers). Blower motor works.
Manual Sunroof works.
Door locks work, up and down!
AC compressor is connected with belt. Who knew they ever did that? I've only seen one, and that was a creampuff. Owner claimed AC doesn't work.

Here's what I know it needs:
-Half axle on drivers side. Boot is ripped. not clicking, but we know how this works.
-Little bit of TLC - some touchup paint around the body, catch the rusty jack points before it moves from some surface rust.
-Diagnose some of the out of place wiring. Looks like someone bypassed the key switch at some point. Also looks like there's wirenuts connecting the aux fan in the front...
-Key switch is ... not springing back to 'run' - it's very stiff, too.
-Rear drivers window. front window controlled by back window switch currently.
-Sunroof paste. I need some for all of my cars anyway. It's time. I'd hit this one too.
-Needs brakes. Brake light, brake lining light, and fuel low light are all on. Strange. Maybe ground!
-SLS Inoperative. I think I heard the pump trying to work though. Maybe the AC compressor. Neither I've ever had working, so it'll take more digging.
-Found car isn't charging (on the way home) - Wonder if it's tied into this sticky switch problem?
-Definitely the forward/back bushing under the car needs to be replaced. completely loose, but works just fine somehow anyway other than the moving it all the way to S to find Drive. /shrug Didn't even rattle on my way home.

So, I bought it. Drove it home, about an hour and 20 mins away. Other than 3-4 test drives in the past couple days, it's sat for 2 years.

How much would you have paid for this car? I'll give you guys one day to guess. No cheating! :thumbsup:

Dave aka Ghan
U

Pretty darn good, if you ask me. Now here's to hopin' I can get the SLS going and I can really test out this whole wagon ownership! 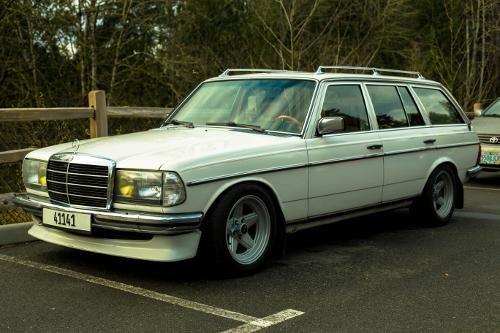 Joined Jul 24, 2006
·
5,787 Posts
hey lemme know if you need any random interior widgets, oddments, or other whatnots. we're trying to find homes for every little part we can on this part out im working on.
► Show Full Signature
FOR SALE: absolutely mint 1992 BMW E30 318i cabriolet