I looked at a 1995 E300D with 260,000 miles on the clock. I've had only diesels before, though this would be my first diesel car, looking for a good, efficient commuter. I've known a few to have Mercedes OMs and they've been good runners

Here are some problems with the vehicle:

-there's a squeak in the rear right, the owner and I removed the tire and put transmission oil on a bushing closest to the door, it stopped the noise - though I would want to replace it

-the rear headrests do not move from the button on the control console, I tried it with the engine running as well.

-the rear left window does not move, though I can hear something in the door trying to work

-the car dies in reverse sometimes, to keep it running your foot has to be on the gas. I suspect its the idle linkage? though I don't know for certain.

In your opinion/s, how much would need to be put into the vehicle to get it in better condition?

The cost of repairing the AC alone could be very expensive.

It's all about service records, records and more records.

With that mileage, you need to find out if the trans has been replaced/overhauled yet. If not, it's most likely going to need it pretty soon. Same story on the engine wiring harness due to the eco junk wiring issue these cars came with..

Unless you're willing to throw a few thousand at it right away, IMO a better example can be found.


and another 4500 i think I could talk down that looks well taken care of. Brand new interior, paint is in good condition. has 210, 000

I am a living example of what the others are talking about. I bought Dieter ('95 E300 Diesel with 240,000 miles) off the internet. I paid extra to have it inspected but did not see it in person.The inspection showed no problems nor did the carfax report.

When the car arrived it had been painted by a chain paintshop that I will not name with overspray everywhere, the front bumper looked like it had been chewed on by a large dog, the ac didn't work and the engine smoked on startup.

The price was only $3000 so I thought it was still ok. After all I paid for the inspection, right? What could go wrong?

Well, my mechanic went over it and came up with the following:

As far as the body work:

See how it adds up? I did get a refund for the inspection fee ($125, big deal!) but the rest is all mine. My lawyer tried to settle with the PO but since the inspector was independent of the owner I had no recourse with the owner as far as getting my money back. The good news is that the interior is perfect and the car has no rust at all.

I got the mechanicals done and the bumper replaced but the other bodywork will have to wait. I should have flown to Dallas to see it and drive it but I thought I had all my bases covered with the inspection and the pictures that were e mailed to me.

You must take it to an indy you trust or do the inspection yourself if you're a mechanic and also unless you're a mechanic that likes a challenge of a project car everything must be in working order or WALK AWAY!

Joined Sep 7, 2012
·
27 Posts
Wow that's terrible! I'm sorry you had to go through that and glad I have the opportunity to get your insight here!

There's another example I'm planning on seeing this weekend. Let's see how it goes. I am a mechanic - most of my recent work has been on M1009 CCUCvs. The last I had got a 4" Lift, 14 bolt f/f rear axle, rear disc brake conversion, banks turbo, custom 1410 drive shaft, manual swap, custom bumper, solar panel and inverter - and i sold it:crybaby2:

I'll get another some day and do a cummins swap directly, just nee to be patient. I do want a commuter car and not a project though, thanks!

There was a benz for sale locally and on ebay a while back near me. On ebay, on paper, the car was in excellent condition.

I went to look at the car and the passanger dool panel had dents that were poorly repaired--they were pulled out and the panel was sticking out! I could see this flaw from twenty feet away.

Of course the photos on ebay were in such an angle that the dents wern't viewable.

If a car is for sale in a medium to big city, and it's on ebay, there's a reason for that.

WDiesel said:
I'm concerned about the A/C system - are there signs that it will be going out if it is in working order?

What can be done to ensure it doesn't go out and cause a $hefty repair
Click to expand... 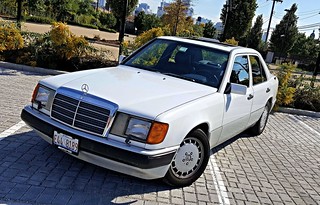 That usually means a higher purchase price but it is money well spent over the course of ownership.

It's all about maintenance and how much the owner(s) cared for their vehicles. I've bought MBs that had over a million miles that were in better condition than ones with a couple of hundred thousand.

I would expect you to pay at least around $5K for a W124 diesel that is in very good condition that is needing little to no extra work immediately other than routine maintenance. This is excludes non--mechanical stuff such as paint/interior stuff, condition of windshield, etc, etc, etc.
W

Mercedes>Bmw said:
that's all your concerned about...? :surrender:
Click to expand...

haha no that is not all, though on a car I test drive where the AC is working - are there signs that it would be on it's way out? I've been told that it's probbly the most expensive repair Id have to tackle on these W124s by a few sources.

I'm not going to touch the first car at all.:thumbsup:

Nimrodthewombat said:
I have no one to blame but myself. It was a good lesson, an expensive one but a good one all the same.
Click to expand...

From your explanation, the licensed inspector should have insurance for such a case?
For last 15 years I am buying diesel Mercedes in southern, or eastern states, bringing them to California where diesels are not sold for last 16 years. Never got burned, but I always fly with cash in hand and most of the time had return ticket since those used to be cheaper than one way tickets.
The purchase a month ago - 1998 E300DT with 250k on it come out as perfect car. I mean I had to purchase new driver seat leather, get second key and had to flush green coolant, but beside couple of dents the car drove 3000 miles home with flying colors.
► Show Full Signature

Kajtek1 said:
...
For last 15 years I am buying diesel Mercedes in southern, or eastern states, bringing them to California where diesels are not sold for last 16 years....
Click to expand...

They may not have been available in CA every single model year, but they were definitely out there if you looked hard enough.

The fine print on the inspection contract read:

"In case of negligence the only recoverable amount shall be limited to the amount paid for the inspection only".

sbaert said:
What do you mean???

They may not have been available in CA every single model year, but they were definitely out there if you looked hard enough.
Click to expand...

The last MB diesel sold new in CA was in 1987 and that is the model I own.
W211 diesels were never sold here and I am not sure what year or if Bluetec was allowed here. I am not much interested in newer cars since business is slow.
► Show Full Signature

Nimrodthewombat said:
The fine print on the inspection contract read:

"In case of negligence the only recoverable amount shall be limited to the amount paid for the inspection only".

In short I'm screwed because I didn't read the fine print. My fault and no one elses.
Click to expand...

Now imagine such print on contract for brain surgery or major lawsuit?
I still would assume you have very good base to put the "inspectors" out of the bussiness. Did you call their license board? You can try BBB, but those folks are big joke.
► Show Full Signature

Kajtek1 said:
The last MB diesel sold new in CA was in 1987 and that is the model I own.
W211 diesels were never sold here and I am not sure what year or if Bluetec was allowed here. I am not much interested in newer cars since business is slow.
Click to expand...

Once again, you are talking out of your @ss big time just like your continued bragging about running your cars without a fan clutch. If the factory didn't think there was a need for one, then the car wouldn't have come with one.

If you wanted a new W124 diesel in CA back in 1995, the E300 diesel was available in CA. And, as I stated before, diesels have been available in CA ever since although not every single year due to continual changes in the CARB (California Air Resources Board) requirements.

W211 diesels were available in CA, although in very few numbers.

If you want to buy a brand new MB diesel in CA today, all it takes is a trip to your local dealer.