1985 500SEC, 1991 190E 2.6.
Joined Sep 2, 2004
·
45,767 Posts
Formula 1 preview of the Turkish Grand Prix 2021
PREVIEW GP TURKEY 2021Chaos again thanks to the rain?
As in the previous year, the Turkish Grand Prix could be spiced up by rain. This gives the midfield drivers another chance to intervene in the World Cup duel between Max Verstappen and Lewis Hamilton. In the preview we have the last information about the Istanbul race.
Andreas Haupt, Tobias Grüner
10/6/2021
In 2020 Lewis Hamilton traveled with a comfortable 85 point lead over the Bospurus. His second win in Istanbul Park made the seventh world title perfect. The Mercedes driver is still a long way from that this season. Max Verstappen could not be shaken off in the first 15 races and only came to the seventh-last Grand Prix of the year two points behind.
As it did eleven months ago, the weather could again play the main role in Turkey. Stubborn rain showers are predicted for Saturday and Sunday in particular. In the previous year it became clear that the smooth asphalt in Istanbul offers little grip even when dry. When it was wet, the fans were offered a really entertaining slide. The starting order with Lance Stroll in pole position was completely mixed up several times during the 58 laps of the race.

Hamilton showed his exceptional class in the difficult conditions and in the end won by more than half a minute. This year, however, a penalty could ruin the party for the British. The rain increases the likelihood that Mercedes will install the fourth engine, which would involve relocating. On the other hand, on damp ground there are more opportunities to make up for the lost places.
The route: Intercity Istanbul Park
Thanks to Corona, Istanbul celebrated an unexpected comeback in the racing calendar in 2020. Between 2005 and 2011, the track was still a regular at Formula 1. The smooth circuit is about an hour east of the city - on the Asian side of the metropolis. Many say that the 5.338 kilometer long runway is one of the better designs by route architect Hermann Tilke.

It has 14 curves, six of them to the right and eight to the left. In Istanbul it is driven counter-clockwise. The course has a lot of character. The highlight is turn eight, a high-speed link with four vertices. The modern Formula 1 cars shoot full throttle through the left bend on a dry track. The pilots are exposed to loads of more than 3g for six seconds.
On the home straight, the drivers are allowed to open the rear wing. It is one of two DRS zones. The second is on the long back straight between turns ten and twelve. According to Mercedes, Turkey is one of the better circuits when it comes to overtaking. Because of the slippery asphalt, tire wear is limited. Traditionally, there are only a few strategy options that could cause shifts in the field. The question is how the asphalt has developed in the last few months. To get the greasy oil down, high pressure cleaners were used.
VIDEO

Formula Schmidt for the Hungarian GP in 2021
00:24:35
Fast Facts Istanbul
The setup
In 2011 Sebastian Vettel took pole position in the Red Bull with a lap time of 1: 25.049 minutes. Despite advantages in terms of power and downforce, the modern cars did not come close to the old records last year. The reason for this was the already mentioned slippery asphalt, which already led to some spins in free practice. In qualifying and in the race, the rain then horrified the time chase.

In order to find some grip on the freshly laid subsurface, the engineers had to drive steeper wings than previously simulated. The mechanical setup also had to be adjusted. The technicians also always had to keep an eye on the tire temperatures that tended to be too low. The mercury should hardly climb above 20 ° C this year, which makes it difficult to bring the rubbers into the correct working window.

After all, Pirelli took countermeasures when choosing the mixes. Instead of the three hardest varieties as in the previous year, the Italians now have the medium-hard variants C2 to C4 in their luggage. It will be interesting to see whether the asphalt has gained a bit of grip within a year. Incidentally, there is no great help from frame races with rubber laying. In addition to Formula 1, there is only the so-called "Intercity Cup" in Istanbul at the start. 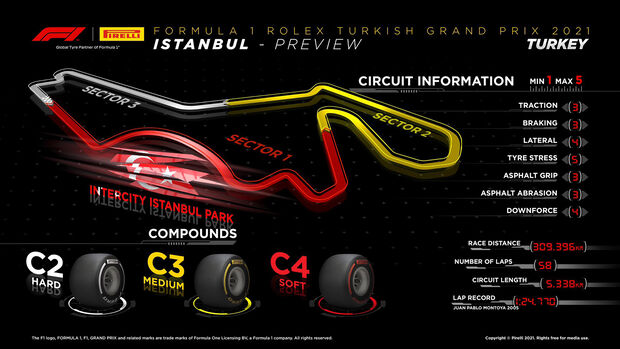 Pirelli
Pirelli is bringing slightly softer tires this year than in 2020.
Upgrades
Unfortunately, we have to repeat ourselves at this point. In the season's final spurt, technology fans hardly get their money's worth this year. All teams have long since completed the development of the 2021 cars. The entire focus is on the completely new models for 2022. Now, at most, small parts that have been in the pipeline for a few weeks will be added.

The situation on the engine front is more interesting. In Sochi, Ferrari had equipped Charles Leclerc's car with an improved hybrid drive. It is quite possible that Carlos Sainz will follow suit just one race later, which would, however, result in a starting place penalty. The rain could tempt a few more teams to go beyond the allowed limit for the drive units. It is quite possible that there will be shifts in the field after qualifying.

The favorites
After the two Mercedes tracks in Monza and Sochi, there is now another track in Istanbul where it is not so easy to say beforehand which of the two top teams has an advantage. The straights in Istanbul are not quite as long as they were last time. In the curves, faster and slower corners alternate. In the end, it will depend on the right setup and form on the day.

After the rainy race weekend last year, the data situation is rather poor. Surprises cannot be ruled out. With the weather forecast changing again, forecasts would be just reading coffee grounds. Just so much: After the brilliant performance at the 2020 Turkey Grand Prix, we would at least not bet against Lewis Hamilton.

The midfield teams have recently shown that they can keep up with the top cars on wet roads. Of course, McLaren and Ferrari should be mentioned first of all. In the duel between the two traditional teams, the Scuderia should again show off stronger. Engine power is not that important in Istanbul. A good all-rounder is required here. 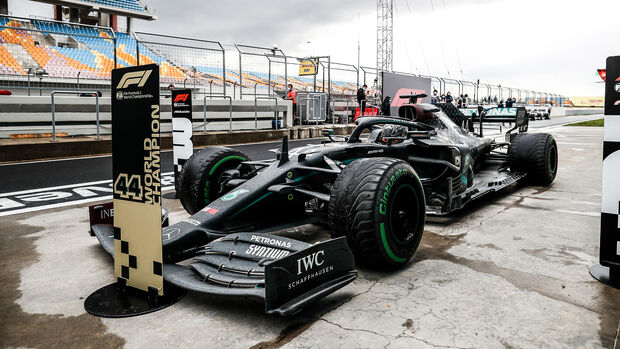 xpb
Lewis Hamilton celebrated not only the victory in 2020 but also the early title win.
This is how the race went last year - GP Turkey 2020
The Istanbul Race 2020 will be remembered by fans for a long time. In difficult conditions on the wet runway, only a few pilots made it through the laps without mistakes. The audience got one slip after another. Valtteri Bottas put several pirouettes on the asphalt. At the beginning, pole setter Lance Stroll showed his rain qualities. The Canadian made the first (and only) 32 leading laps of his career. But after his second stop on fresh intermediates, the Canadian fell further and further behind.

Lewis Hamilton and Sergio Perez couldn't get in after their first switch to intermediates and continued to do surprisingly fast laps on the wacky rubbers. On lap 37, the Mercedes star then made short work of his Racing Point competitor. By the time he crossed the finish line, he had extended his lead to 31.6 seconds. With the victory, Hamilton made clear the title win at the same time.

There was a hard fight for the other podium places until the end. Charles Leclerc got a little out of step when he attacked Perez in the last corner and had to give way not only to the Mexican, but also to his Ferrari team-mate Sebastian Vettel. Max Verstappen had already lost all chances of victory due to a spin in the duel with Perez in the early stages. The Dutchman ended up in sixth place in the end.

In the gallery we show you again the wild scenes from the previous year.

Chicky said:
... IMHO, the team will take a chance of an engine change for LH, which will place him at the back of the grid ... but with the projected rain, these will provide LH an opportunity to catch up with the front pack. LH being the "rain master"

Full Q1, Q2 and Q3 results from qualifying at the Turkish Grand Prix, Round 16 of the 2021 Formula 1 world championship.

Had Hamilton changed tires the first time it was suggested, he might have had a shot at third, or at least fourth..

Full race results at the Turkish Grand Prix, Round 16 of the 2021 Formula 1 world championship.