Obviously, I don't drive the car much. I average 400 miles per year), and it sits for long periods between use (typically from mid-Oct until mid-April when it rains almost everyday and the roads never dry up here in the PNW). Typically it is weeks between drives even during nice weather, during which time I am sure the oil thoroughly runs off all the engine parts. The car has never been driven with the top up (I cycle the top once a year, and keep a cockpit cover on the open cockpit it when not driven), driven in the rain, or even on a wet road, so obviously I am a bit obsessive about the car, so please excuse my concern with the engine issue I mention below. I know it's not worth much (about as much as a well-used decade old Kia Rio with 100k miles), but I enjoy having it and keeping it nice for blue-sky rides occasionally, regardless.

Ever since I bought the car, if the engine sits more than 3 days, after start it is quiet for maybe 2 seconds, then I hear a noise like a loose timing chain rattle for another 2 seconds, and then it goes perfectly quiet again for however long it's driven, or if shut down and driven for up to 3 days (starts up to 3 days create no noise at all). I've asked on the MB Forums, and learned this is not terribly unusual for these engines to do this (though not all of these engines exhibit this quirk), and had it confirmed by a local MB specialty shop, in fact.

The general opinion from previous questions on forums is that the oil drains out of oil pathway for either the variable valve solenoid, or the chain tensioner, and the noise begins as soon as the existing oil is displaced by an air bubble, and ceases when pressurized oil again fills the components. One tech suggested I replace the hydraulic timing chain tensioner, saying that the ratcheting portion may not be holding tension on the tensioner until sufficient oil pressure builds after starts. I did, in fact, replace the tensioner assembly with a new Febi replacement tensioner assembly with absolutely no change in noise characteristics.

In any case, I don't think it's good for the engine to make this noise (metal to metal, or chain whipping around), and would like to eliminate any ill effects from whatever is causing it.

Another independent MB tech suggested fabricating an engine pre-oiler that could be manually activated for sufficient time to fill all of the oil galleys with oil before starting the engine. I don't see any downside to such a device, and I was wonder if anyone here has thoughts, suggestions, or has fabricated such a device for his engine.

I looked online and found pumps that seemed they would work for the purpose. I don't think I'd need much pressure to send low viscosity synthetic through the engine to get any air out of the system as well as get oil on the camshaft lobes and such so that when the engine oil pump turns, the oil lines will be full and ready to pressurize everything.

It would seem I'd need an oil source for the pump, and some sites recommended fitting a modified sump drain bolt that would pass oil through a hose to an electric pump, after which the oil could pass through a metal cased filter (maybe a small universal fuel filter intended for low pressure use), then through a one-way check valve typically used as a fuel anti-drain-back on fuel injection systems (rated to 100+psi) and finally into a "T" fitting to the oil pressure sensor connection to the engine block, with the sensor also mounted to the "T." The pump could be manually activated by a switch either under the hood, or in the cockpit.

After each drive, I always wash the car, and leave the hood cracked or open to protect the paint and underhood components from high temps from heat-soak during cool-down, so it would be no big deal before starting it days or weeks later to raise the hood and hold the pump switch until I could hear the pump laboring for 15-30 seconds confirming the lines are full and oil has dribbled onto the cam. Then I'd simply start the engine at which point it would (hopefully) be a quiet start.

Such units are available commercially for $350--600, but I suspect I could fabricate one for about $100 or so for the components.

So...
Comments or thoughts on:
1) Alternate causes of the noise?

1998 , SLK 230
Joined Mar 5, 2008
·
247 Posts
I worried about that noise about 10 years ago until I found out it was normal. Seeing that no one has found that any damage is associated with the noise, I'd suggest the pre oiler is more trouble than it's worth.
B

Mike C 3039 said:
I worried about that noise about 10 years ago until I found out it was normal. Seeing that no one has found that any damage is associated with the noise, I'd suggest the pre oiler is more trouble than it's worth.
Click to expand...

So you have experienced/still experience it as well I take it?

Do your symptoms (description of the start sequence and sitting-period necessary before a start will create the noise) roughly match mine?

Have you sought a solution without success?

I still find it rather unnerving and would likely drive my car more often in the Summer if I thought I wasn't destroying the engine somehow.

1998 SLK 230
Joined Jan 30, 2007
·
2,623 Posts
I would start with the basics. what brand of oil is it running and most importantly what viscosity? some people mistakenly put a "thicker" oil in a car because of its age to try to solve issues like oil leaks etc, but that causes issues with internal components and oil pressure etc.

My car has only ever run Mobil 1 fully synthetic 0w40. if the oil is too "thick" at start up the engine can make some odd noises until the oil gets there in time. I also use a engine flush each time changing the oil on all my cars too https://www.amazon.com/Liqui-Moly-2037-Pro-Line-Engine/dp/B00CR3RXTO

Subby_ said:
I would start with the basics. what brand of oil is it running and most importantly what viscosity? some people mistakenly put a "thicker" oil in a car because of its age to try to solve issues like oil leaks etc, but that causes issues with internal components and oil pressure etc.

My car has only ever run Mobil 1 fully synthetic 0w40. if the oil is too "thick" at start up the engine can make some odd noises until the oil gets there in time. I also use a engine flush each time changing the oil on all my cars too https://www.amazon.com/Liqui-Moly-2037-Pro-Line-Engine/dp/B00CR3RXTO

get the car to operating temp, pour the product in and let it idle for 10min. then proceeded to drain the old oil. this is gentle enough to do a decent clean.
Click to expand...

I use LiquiMoly products and have for over 45 years when I used to bring them back from Germany in my suitcase (it was not sold here then and was called LubriMoly before they changed their name-US Customs agents thought I was nuts, of course), but have not used their engine flush.

At 42k miles the inside of my engine was white-glove clean (until I used LiquiMoly MOS2 once which makes oil look a bit "dirty"), so not sure if every-change flushes are necessary on this engine, but perhaps the M111-983 is a troubled design like some other MB designs (stretched and broken timing chains, bad balance shaft gears, bad air flap linkages, etc) and requires frequent flushes, but I hadn't heard any bad things about the M111, though I admit that this not unheard-of noise is somewhat troubling. This site 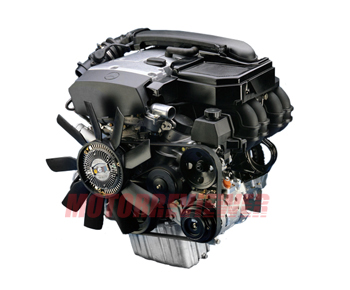 The major parameters of M111 Engine 2.0L - bore/stroke, power and torque, oil specs and capacity, the main problems and advices to prevent them.
www.motorreviewer.com
says all M111 engines are noisy and eat spark plugs, and the OEM Victor Reinz Head Gaskets are said to fail frequently, but I would think by "noisy" they mean "running noises" and not start-up noises as are being discussed here.

I can't wait to try the brake pedal procedure prior to start to see if it inhibits the noise, but still wonder why it might work.