wallyp said:
As a general rule, melted fuses and fusebox connections are a product of resistance in the connections, not high current. Current thru resistance causes heat.
Click to expand...

Agreed. In this case I can confirm a high current situation due to a shorted fan motor and a fuse that didn't blow.

It was fun while it lasted

cmitch said:
In my case, the blower motor was fine. It was the regulator that eventually caused the meltdown.
Click to expand...

What is really interesting about that in both failure modes; regulator failure and motor failure; the fuse did not open the circuit before melting. Yuck!
M

mrboca said:
In W210, there is no fuse. The fuse is the blower regulator switching transistor pair
Click to expand...

This shows a 10A and a 15A fuse for "Blower Motor AC" in the primary fuse box in the engine compartment which makes me feel better for the wiring in my W210 vs my w215.

GreenZZZ said:
This shows a 10A and a 15A fuse for "Blower Motor AC" in the primary fuse box in the engine compartment which makes me feel better for the wiring in my W210 vs my w215.

They are not for the blower. They are for the a/c controller which "controls" the blower. The blower in full speed will consume about 30 to 35 amps. The blower is hardwired to the unfused + terminal block, and the other terr terminal is connected to the regulator which completes the circuit to the ground terminal behind the dashboard.

mrboca said:
They are not for the blower. They are for the a/c controller which "controls" the blower. The blower in full speed will consume about 30 to 35 amps. The blower is hardwired to the unfused + terminal block, and the other terr terminal is connected to the regulator which completes the circuit to the ground terminal behind the dashboard.
Click to expand...

No melting fuse box with that setup! Don't want to nick the wire insulation though :eek

I had a Vanagon that had a dashboard smoke up badly when some insulation rubbed off a wire. That car fused the circuits just before ground, not close to the 12volt which is more customary... and safe.
M

1998 E320 base sedan @ 160kmiles
Joined Jun 23, 2012
·
6,195 Posts
That must be the reason why they deployed pre-fuses, instead of the terminal block like X4 which provides power to the blower as well as many other circuits. There may be a fusible link in the terminal, I am not sure. Else, the 4mm red wire that supplies power to the blower motor would be toast. Anyway we digress, this is the W220 forum

2006 CL55 AMG, 2002 E320 (totaled), '72 Datsun Z
Joined Feb 19, 2011
·
138 Posts
@wallyp for the win! I took apart the donor car's fuse box and lots of corrosion on the fuse blades as well as some heat scoring on the plastic. Also found a weird bit of plastic on the hot blade holder... The fuse in my car was probably mostly melted prior to the blower motor shorting out. The shorted blower just finished off melting the plastic and coating the fuse until the low voltage problem began.

The top row of fuses are the originals and the bottom row are the donor cars fuses. The blade the broke off was welded into the platic of the fuse box and got distroyed. Makes me want to replace every fuse in the car... Routing the power to blower outside the fuse box like @cmitch did is the way to go even before the problem occurs. At a minimum, everyone should replace the 40 amp MAXI fuses with new and di-electric greased parts.

GreenZZZ said:
...At a minimum, everyone should replace the 40 amp MAXI fuses with new and di-electric greased parts.
Click to expand...

ABSOLUTELY agree!
IMHO it is not the shorted blower or regulator that causes the problem with overheated fuse box and fuse link although it accelerates the problem and brings it to a failure.
The real issue here is corrosion on the fuse link contacts which introduces resistance into the circuit. Then even a small current through the circuit will generate power and hence heat as per Power = Current squared times Resistance. Notice double the current you get four times the power! So when you get a current increase due to a failure down stream the heat rockets up dramatically.
The solution as has been said by wallyp, GreenZZ et alia is to check the fuse links and as a minimum grease them to keep the air away. If there is any sign of corrosion replace them before the issue gets bigger.
Brian

mrboca said:
The blower in full speed will consume about 30 to 35 amps.
Click to expand...

Parts all came in and I put my car back together. Confirmed @mrboca current draw. Measured 24.3 amps both at the input to the regulator and the input into the blower. I measured at idle; forgot to rev the motor/alternator. I'm sure it goes to 30 at 1800 rpms. I'm still wired through the fuse box. I'll rewire it before summer. As recommended by @ricebubbles, I took apart the prefuse box on the floorboard and brushed it and greased it. Need to do the one in the trunk.

Very thankful for the guidance!

The second time was earlier this year (2018) during a major rain storm. The whole interior got taken apart, and I took a wire brush to every electrical contact that I could find. Yep, even the CANBUS connectors and where they plug into. Took the rear SAM completely apart and scrubbed everything. Took the boxes inside the rear SAM apart and scrubbed everything. That's how I found out that this car had gotten water in it at least once previously; there was some old oxidation. That's now completely gone.

So, this time, when I discovered that the blower motor went bye-bye, I did the same to every fuse in the two front SAM's, as well as that little box with 4 or 5 fuses and two relays next to the front passenger SAM. Also did every fuse in the passenger-side fuse box (right-hand side, here in the USA).

Blower motor still wouldn't come on. Then, I found this thread.

Oh, was this a lifesaver. Did the testing in there, and sure enough, it's the blower motor. New Behr blower is on the way. Also am replacing the regulator/resistor with a new Behr OEM unit, since I'm in there anyway. Might as well do it all at once and get it all knocked out.

By the way, the dealerships, and FCPEuro, are both being given bad information about which part number is correct for the regulator/resistor. They're all saying that part #2208209210 is right for the W220 chassis. This is *not* correct; the correct part number is as follows.

Here's the evidence, from the one I pulled out from the '03 S600 TT, this evening. Thumbnails are clickable. 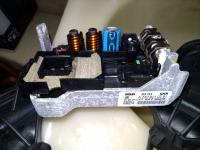 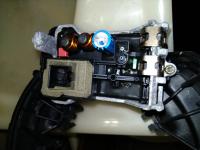 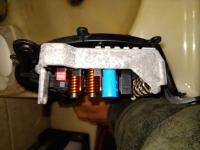 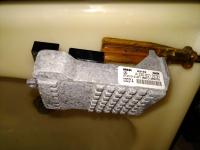 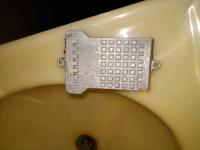