Joined 10 d ago
·
2 Posts
Hi all, my radio recently stopped functioning over the winter (turns on, can search stations but no sound) and the retractable antenna started doing some unusual things. It would retract and extend randomly, whether or not the radio was on or off. It has now settled in the extended position whether the car is running or not. I went out of town for work on short notice for 2 months and forgot to disconnect the battery, when I got home it was dead. No big deal right, I jumped the car and it fired up right away. But after taking it for a 30 minute drive it would not crank, 11.5V at the battery when the car is off. I'm wondering if the two are related or if anyone else has had this issue. The battery is 2 years old. 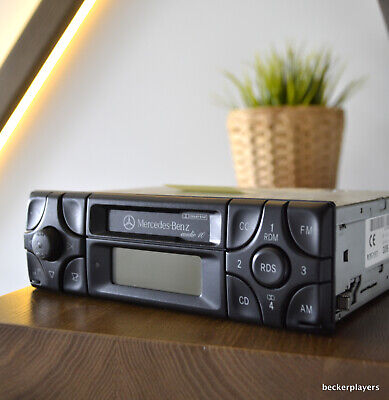 Find many great new & used options and get the best deals for Mercedes-Benz Audio 10 BE3100 Becker Radio/CC player for w210 w202 w140 CLK SLK! at the best online prices at eBay! Free shipping for many products!
www.ebay.ca

11.5 volts is low, indicating a lack of charge or that the battery may be "sulfated" which is common on non-deep cycle batteries after a complete and lengthy discharge. As Jayare said, you need to give the battery a good 24 hr charge. I prefer to use a good old fashioned manual charger because I have found that many of the new "smart" chargers are not so smart and will give up on a battery that could otherwise be charged. If the voltage does not return to around 12.6 volts and/or you have starting issues, the battery is bad and needs to be replaced.

You also need to check the charging system voltage which should be between 13.6 and 14.6 volts with the engine running to make sure the battery is being charged in use.

Lastly, the Audio 10 from the 1999-2002 E class or SLK is plug and play for the later W124s, '94/'95. I have one in my Cabriolet. I even hooked up the DB2 optical bus so I could use a CD changer/ipod adapter. I'm not sure about the earlier W124s, but I don't think so.
► Show Full Signature
Floobydust: a contemporary term derived from the archaic Latin miscellaneous, whose disputed history probably springs from Greek origins (influenced, of course by Egyptian linguists) - meaning here "a mixed bag." - National Semiconductor Audio Handbook
S

Joined 10 d ago
·
2 Posts
Extremely helpful guys, found my old as dirt Mastercrap charger to be non-functional so will pick up a new one and report back. Many thanks
1 - 5 of 5 Posts
Join the discussion
Continue with Facebook
Continue with Google
or sign up with email
About this Discussion
4 Replies
4 Participants
Last post:
speedmachine 9 d ago
Mercedes-Benz Forum
BenzWorld.org forum is one of the largest Mercedes-Benz owner websites offering the most comprehensive collection of Mercedes-Benz information anywhere in the world. The site includes MB Forums, News, Galleries, Publications, Classifieds, Events and much more!
Full Forum Listing
Explore Our Forums
W126 S,SE,SEC,SEL,SD,SDL Class W163 M-Class R/C107 SL/SLC Class W124 E,CE,D,TD Class W210 E-Class
Popular Communities