1961 Swiss Unimog 404
Joined 3 mo ago
·
67 Posts
The fuel system is now complete, I retained the previous owners dual tank single feed running through an electric pump into the tank selector valve. The E pump will stay in reserve for filling the carb after periods of non use. Rebuilt stock pump, filter, and forward fuel lines have returned after being removed by a previous owner.

1961 Swiss Unimog 404
Joined 3 mo ago
·
67 Posts
The engine compartment is starting to fill up again! Today I got the front main crank seal, counterweight, fan, radiator, thermostat, and belts installed.


Also spent time cleaning all the grounds up, some corrosion going on after all these years. The wiring remains flexible with soft insulation but the exposed terminals need love.

1961 Swiss Unimog 404
Joined 3 mo ago
·
67 Posts
Tried setting things up to time the mog at #1 TDC and realized something was wrong pretty quick. Long story short, someone had put the distributor drive gear on backwards making it 180 degrees out, this would explain the popping carb and backfiring. The retaining collar was also not seated tight to the base of the distributor either making full contact for the drive gear spotty at best.

Didn't take long to remove and replace the drive gear in the correct orientation. After setting the retaining collar tight to the base of the distributor the whole thing seated correctly and made firm contact at the base.

I set the timing with a light to gauge the points opening and locked the whole thing down at 0 degrees on the fine tune indicator.

1961 Swiss Unimog 404
Joined 3 mo ago
·
67 Posts
Putting in the heater lines today and the more I looked at the heater the more I felt it needed to come out for a cleaning.

It hasn't worked in who knows how long and a close look explained why. The switch on the dash is a simple on/off affair, both wires ran from the switch to the resistor (which has a broken connector) and that's it, no power supply. I'm going to revamp the system for a high/low fan speed.

A bit of a chore to extract the unit but it can be done. The heater box itself was full of mouse house and acorns. I sprayed it down with a vinegar/ water solution to kill any mouse turds and set it aside to dry.

1961 Swiss Unimog 404
Joined 3 mo ago
·
67 Posts
Next up was the carb... I pulled the jets under the cover to be sure they were clear and discovered trashed O rings. Figured I better open it up and see what was going on in there.


The mog came with a box of carb parts and two rebuild kits. Somebody replaced the bulk of the brass stuff but left all the old gaskets. The accelerator pump was not working well. It has a rubber cup and didn't produce a good shot of gas when pushed down. I swapped in the old leather pump which was in excellent condition and got a huge improvement. Maybe this is the wrong one or just a crap part.


I made sure to blow out everything and use new gaskets, it can't be any worse than the last rebuild it got.

I do seem to be missing the small nut with screen in the intake.


Also does anyone know what the correct setting is for the accelerator pump linkage for a 404 with the stock accelerator pump? I set it where it was but no idea if it's correct...


It took a few tries but I got the level set at the .728" spec below the gasket. I ended up having to make .006" worth of brass spacer gaskets to get it dead on. The .020" gaskets that were in the carb parts it came with changed the level too much to get it in spec.


I got it back in the same way it came off, having the top metal line removed first. Tight fit with all the new gaskets and hose but worth it to replace the heater core with a NOS unit and new hoses. Should be leak free for decades.


While it wasn't leaking with the rebuilt tap, it's a safety in case someone moves the fuel selector.
The final version of the fuel system is both tanks T just before electric pump, the out to hard fuel line that leads to the selector tap. From there it's been returned to stock to the carb.

No popping out the carb or backfiring now, much improvement! It's still stalling out when it gets the gas but not as bad.

I went through the ignition system and checked the coil/ points/plug wires and plugs. Plug were fouled, obviously rich. When I went to start it a few days ago it would not fire at all. Troubleshooting shows NO gas in the carb, wouldn't fill with either pump.

Pulled the carb off today and gave it a double check after doing some research. Turns out I had a dimple on the float where the float valve sits...


I read this could cause some issues with the float shutting off gas when full so I lightly sanded it off then polished to a mirror shine.


I also polished the needle that rests on the float as it had a flat spot .

After putting it back together I bench tested to make sure it was ok and sure enough I had to take out a few of the spacers under the float valve to get the level right. Before the dimple removal it would fill quickly to a level and then slowly go up for awhile, now it gets to that first level and stops dead in it's tracks. Bingo.

tmodler said:
Thanks for posting this. We don’t have as many 404s as we did, and I like seeing the tech in them.

No prob! Maybe somebody might find it handy down the road having a similar issue(s). Mine was never sorted right by the previous owners so there is plenty to post!
D

Also spent time cleaning all the grounds up, some corrosion going on after all these years. The wiring remains flexible with soft insulation but the exposed terminals need love.
Click to expand...

This is a great thread and very helpful as I embark on my rebuild of my '64 Mog. Question on the hose on top of the cylinder head cover behind the oil cap. Is it just a breather hose? Does it connect to something? I have something similar that I can't quite figure out.

daves123 said:
This is a great thread and very helpful as I embark on my rebuild of my '64 Mog. Question on the hose on top of the cylinder head cover behind the oil cap. Is it just a breather hose? Does it connect to something?
Click to expand...

That is the breather hose, though in that case it appears to have an oil screen on it with a drain hose down the side of the block. I don't believe I have ever seen that before. Normally a hose runs back to the air filter to recycle blowby gases. 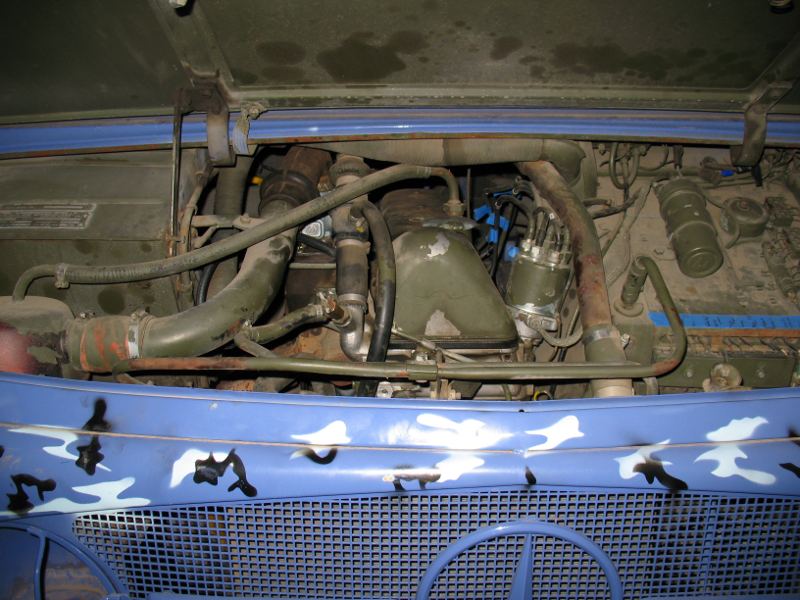 Joined 13 d ago
·
2 Posts
Thanks for the info and pic. Makes sense to run that back to the air filter. That's what I'll do. Thanks again.

daves123 said:
Thanks for the info and pic. Makes sense to run that back to the air filter. That's what I'll do. Thanks again.
Click to expand...

Chopr has it right, either a breather or a pcv valve ( if it only allows flow in one direction it's a pcv valve).
It looks like it runs to a hard line that heads towards the back of the engine. Does it run around to the intake manifold? It's not stock but it serves the same function.

1961 Swiss Unimog 404
Joined 3 mo ago
·
67 Posts
Spent some time on the fuse box cleaning the contacts. The wiring itself is in good shape but the ends and contacts do have some corrosion.


Also ran a wire wheel over the breaker contacts, the slide in/out much better now.

1961 Swiss Unimog 404
Joined 3 mo ago
·
67 Posts
While I had the carb off again I poked around the manifolds some and found some issues. I ended up taking it all off and redoing it. I removed it all and cleaned the block up first. Some of the bolts were loose, some were tight and one needed some careful torch heat to get off.


You could see where the gasket had been leaking so I got a new one.


The manifold themselves were so stuck together that I ended up have to drill out the studs and put in new inserts. I also got a new exhaust manifold from EI as the old one had the stud lodged in it so good it wouldn't come out.


Spent this afternoon getting it back on, much easier than taking it off!


It now has all the gaskets and is torqued to spec. I have no doubt this was allowing air in as it was.


It's a tight space but there is enough room to turn wrenches a bit at a time.


The two bolts behind the manifold are easier to get at from below... The mog is so tall I needed a booster seat to be able to get some leverage on my back, this old ammo crate got me there!


If I learned anything it's to leave everything on the exhaust system loose until it's in position instead of tightening things up as you go. I had trouble getting some things lined up and had to go back and loosen parts. Once everything was orientated correctly tightening parts was no problem.

1961 Swiss Unimog 404
Joined 3 mo ago
·
67 Posts
The tailpipe on this mog was made at a muffler shop and wasn't stock. It came with one of the NOS ones from EI but like Scott says, it doesn't fit the Swiss unimogs. I cut it just after the frame bracket to see how it fit...


You can see the bracket doesn't line up and it's really close to the brake cable.
I decided to use the last 2' of the stock pipe and it's bracket clamp to weld onto the muffler shop pipe to make a stock-ish looking tailpipe.


It turned out pretty good. It fits and looks the part.

1961 Swiss Unimog 404
Joined 3 mo ago
·
67 Posts
It lives! Again! I was able to take it for a mile long trip down the street. Still have some tinkering to do with the timing and fuel system but the rebuilt manifolds are a night and day difference.


Took me over a hour to clean up the work area, sweap it out and put all the tools back that have been slowly migrating out to the barn for 3 months... LOL. It's a great feeling to back it into a clean space and turn the key off. Almost as good as seeing an empty spot after it sitting immobile for months!